What are you looking for?

Thank you. Please, check your email

Want to know more about our services? We will call you for free. 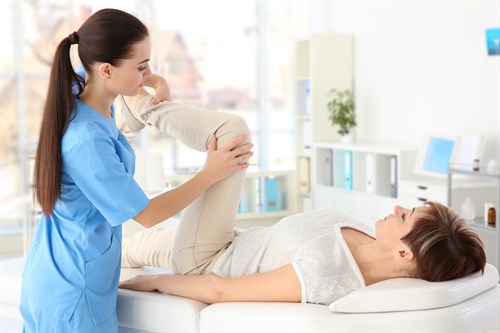 Physical Medicine and Rehabilitation is a medical field that encompasses adequate and complete rehabilitation programs, being physiotherapy one of them. Physiotherapists help patients improve their mobility and educate them to prevent future injuries.

Throughout their lives, everyone can benefit from physiotherapy treatments. Physiotherapists most commonly treat people who suffered from a bad fall, a work accident, had a surgery, suffer from back pain, among others. Physiotherapy is also an important component in the rehabilitation of those who had a stroke or have Parkinson’s disease, when it is important to restore the patient’s independence and improve mobility.

WATCH THE VIDEO OF OUR CUSTOMER:

Medical Port’s network of physiotherapy centers in Portugal includes experienced professionals and state-of-the-art technology and equipment. These centers are also recognized by their experience in treating the world’s best athletes and sports clubs. Click here to learn more about Sports Medicine.

The Department of Physical Medicine and Rehabilitation of Clinica Espregueira Mendes is specially devoted to the rehabilitation of musculoskeletal pathology and pathology resulting from playing sports. It is equipped with the latest technology.

Some of the physiotherapy treatments performed at Clinica Espregueira Mendes are:

Portugal is a great destination for physical therapy and rehabilitation treatments not only for the expertise and knowledge of Portuguese physiotherapists, but also because it’s proven that recovering in a sunny weather is more effective.

According to Harvard Health soaking up in the sun in order to absorb vitamin D is important for the bones and the overall health. “Vitamin D’s best-known role is to keep bones healthy by increasing the intestinal absorption of calcium. Low levels of vitamin D lead to low bone calcium stores, increasing the risk of fractures. As bone calcium density falls, bones become weak and fracture-prone. Most studies show that a lack of vitamin D increases the risk of osteoporosis and the likelihood of hip and other nonspinal fractures.”

World Health Organization stresses, the sun's rays provide warmth and light that enhance your general feeling of well being and stimulate blood circulation. UV radiation is essential to the body as it stimulates the production of vitamin D. Vitamin D has an important function in increasing calcium and phosphorus absorption from food and plays a crucial role in skeletal development, immune function and blood cell formation.

A team of excellence specialized in physiotherapy and sports medicine.

António Gaspar Physio Therapy and Performance is a Physiotherapy clinic coordinated by one of the most experienced and renown physiotherapists of Portugal. António Gaspar is a professional who holds a career path with more than 30 years of experience. Additionally he is the physiotherapist of the Portuguese National football team since 2000.

The clinic distinguishes itself by promoting health and well-being through a personalized and specialized approach, integrating best practices with each person’s specific needs, optimizing the rehabilitation’s process. At António Gaspar Physio Therapy and Performance, each patient is unique.

Doctors who perform this medical procedure

In 1995, applied for the role of Hospital Assistant of Orthopedics and Traumatology of Hospital de São João, being accepted in first place with 20,0 points.  In July 20th of 1995, received his PHD in Orthopedics and Traumatology from Faculdade de Medicina do Porto, being approved with unanimity, distinction and honors. His PHD thesis has the title: “Chronic Injuries of the Anterior Cruciate Ligament (ACL)”.

In October 1998, applied for the Direction of the Orthopedics and Traumatology service of Hospital São Sebastião and was nominated Director. Created from scratch the Orthopedics Service, part of a new management model of public hospitals with each director being responsible for an annual contract-program. In February 22nd of 2002, received the degree of Orthopedics Consultant of the Hospital Medical Career. From 2004 to 2008 he was the President of the Portuguese Society of Arthroscopy and Traumatology. In November 2005, was hired by Escola de Ciências da Saúde da Universidade do Minho has a guest associate professor, responsible for the area of Orthopedics and Traumatology.

In November 2005, he became the Director of Clínica Saúde Atlântica – Clínica do Dragão. He is the Chairman of Clínica Espregueira - FIFA Medical Centre of Excellence - ESSKA and ISAKOS official center. President of the European Society of Knee Surgery, Sports Trauma and Arthroscopy (ESSKA) from 2012 to 2014.

Physiotherapist and Chief Executive Officer at AG – Physiotherapy and Performance

António Gaspar is the reference in Portugal in his sector of activity and physiotherapist of the Football National A Team, a position he has held since May 2000 and he received the Commendation of the Order of Merit, awarded by the President of the Republic, Dr. Jorge Sampaio, in June 2004. He also fills the position of Chief Executive Officer at António Gaspar – Physiotherapy and Performance.

Why should I consider choosing Portugal for my treatment or surgical procedure?

When you choose Portugal for your treatment or procedure, you choose distinguished and recognized medical professionals, internationally certified facilities, access to services 24x7, state-of-the-art technologies and techniques in several areas.

I don’t speak Portuguese at all. Will this be a problem?

Language barriers are not a problem in Portugal.

Medical Port's mission is to provide adequate options for medical care to those looking for medical prevention, diagnosis, treatment and recovery in Portugal, through a simplified access to a group of selected private health care providers, Medical Port's Network, plus a complete service adjusted to each case and condition.

Read More
Contact us Chat Call me
for free